Welcome to the online information nexus for Frank Chadwick's ETO series of WWII European Theater wargames. Here are the official forums we frequent to answer your questions and post announcements:

Thunder in the East Rules book

Thunder in the East Reference book

Official Thunder in the East Free Vassal Kit (v1.1)
Be sure to read the Help file for the latest updates and new features

Official The Middle Sea Free Vassal Alpha Tesk Kit (v0.2.1)
Be sure to read the Help file for the latest updates and new features

Official The Middle Sea Rules and Scenario docs (17 March 2019 version)
These documents are compressed together in a ".zip" file;
Don't waste a lot of printer ink on them; they are changing constantly

Frank Chadwick's ETO vol. I: Thunder in the East

OFFICIAL PLAYER'S GUIDE
These links will become active as these articles are published online.

Section I: Designer's Notes and Analysis

Designer Frank Chadwick just left a note on Boardgame Geek here that we wanted to share with you. It gives you a real look into the master's mind. Enjoy!

First off, thanks for all the kind words. I really enjoy hearing how much you guys are enjoying the game.

Second, a thought on strategic versus operational. My thinking is that each individual game is really operational in scope, at least in terms of the sort of decisions you make each turn. When you put a couple games together, the thinking starts to become strategic in scope, because you start making choices about starving one theater to feed another. The allocation of resources between theaters (particularly for the Axis but also for the Western Allies) is baked into each individual game, but the more games you have linked together, the more control you reclaim over those decisions.

Third, a word about why the scope of the games is the way it is. Originally (and this was pretty much my call) the games were going to be smaller and more numerous. An early war East Front game, a middle-late-war East Front extension, A Balkans game. A North Africa game. An Italy game. etc. Then I woke up one morning and realized how nuts that idea was. It was going to take forever to finish it, and if we weren't dead by then, most of our original buying cadre would be (or would have lost interest). I realized that if we were ever going to finish this project in a reasonable span of time (i.e. less than a decade) we had to take Big Bites. And so we are. But it means completion of the project is visible on the horizon.

To that end we also thought it was important to demo the entire game the first time we took it to ConSimWorld Expo. The finished game was not some pie-in-the-sky intention. We have the finished combined game: maps, OBs, production, the whole deal. That's not to say those will not change as we develop and tighten the game in playtesting. But it does mean we are not just doing separate campaigns with the pious hope that when we get them all done somehow the whole thing will fit together. We have a game and we are chopping it into pieces which are separately playable.

Finally, timing of releases. Originally we planned on a chronological release, starting with Poland. We scrapped that when went with bigger releases (and relegated Poland to the prequel game Dark Beginning). So why is the East first? Simple. If you are going to buy into a big system covering the war in Europe, the hardest thing to get right--and the most important in terms of the general feel of the game--is the East. If that doesn't work, nothing works. And in particular, if Barbarossa doesn't work, it's a wasted trip. So we started there, and step two is the Med, which, in terms of making combined air-land-sea stuff work, is clearly the hardest to get right.

So . . .  hopefully that gives you a little more insight into our thinking on these games. I really am delighted at how much the gamers seem to be enjoying the game. We meant it as a "panzer pusher" writ large, but just because you aim for a target doesn't always mean you hit it. This time it seems like we did.

At the risk of jinxing something, I'll just say I think you are really going to like The Middle Sea.

Here is VPG's official Thunder in the East video playtest.

Alan Emrich introduces Thunder in the East and the larger ETO series of wargames.

Sample gameplay from Thunder in the East using the free vassal module.

An Air-Land attack with a paradrop by the Soviets on the March II, 1942 Game Turn

An Aerial Tour de Force of the ETO Air System with an overview of how it works.

Thunder in the East Components: 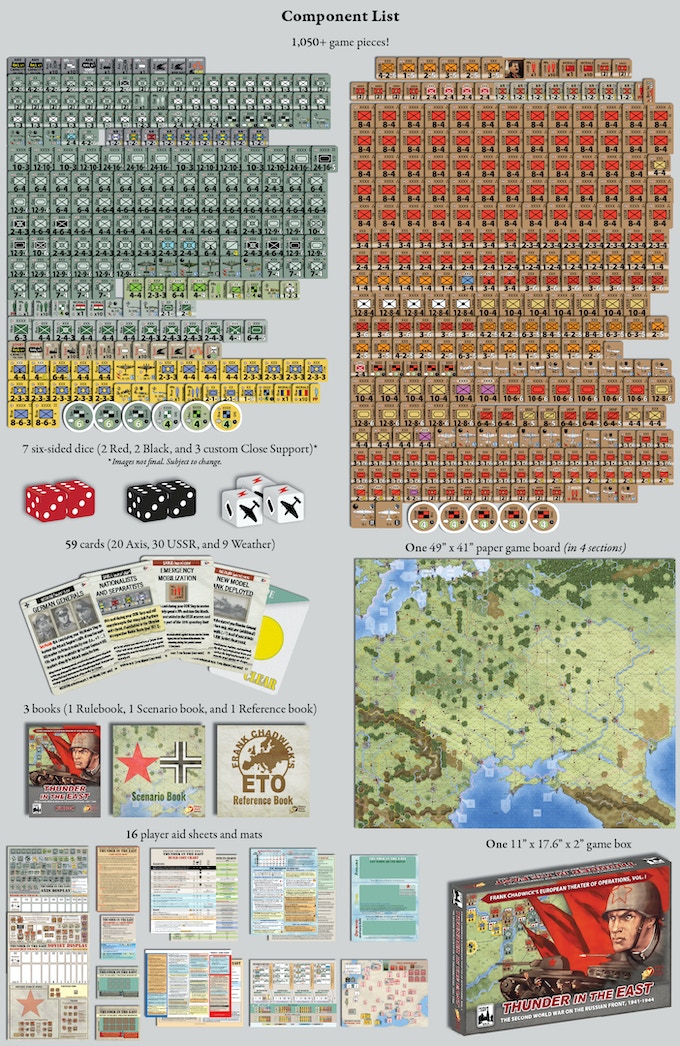